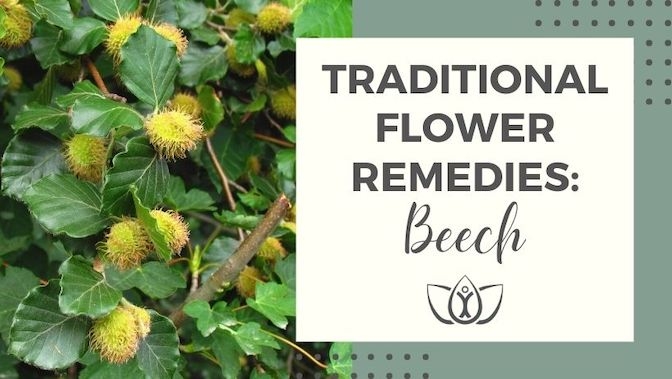 DISCLAIMER: This blog post is not intended as medical advice. Its intent is solely informational and educational. Please consult a health professional should the need for one be indicated.

Do you find yourself often upset by the inadequacy you see in others? Are you quick to criticize or nit-pick other individuals? Are you easily irritated by those who do not think or act as you would?

If you answered yes to the questions above, you would indicate the temperament of the beech personality. When describing this temperament, the word that is most often used is intolerant.

Individuals with the beech personality can be very harsh in their judgments of others. They often wish to conform everyone to their own way of thinking. Instead of realizing that part of the beauty of the world is in the different ways people think and do things, the beech personality demands that all agree with their, often narrow, viewpoint.

Although the beech personality can be outspoken in his or her criticisms, it is not uncommon for the beech individual to outwardly seem patient while seething inside. Usually, the frustration and annoyance felt by the beech personality are completely out of proportion with the severity of the perceived wrong committed.

An intriguing aspect of the beech personality is that some of these individuals tend to experience digestion difficulties. This may be attributed to the fact that:
one tends to project too much to the outside, and have extreme
difficulty in focusing inward and digesting experiences (Scheffer 46).

When looking closely at the beech personality, many of us can probably recall specific incidents during which we have been this intolerant, although it is not necessarily our essential personality. In such cases, the beech remedy can be of help to get through these negative periods of life. However, the beech personality is someone who exhibits these characteristics all of the time.

The flower remedy beech can help encourage tolerant and sympathetic sentiments. A better attitude regarding the idiosyncrasies found in others can be achieved. The positive beech state begins to find freedom from his or her own inner rigidity, discovering joy in its place.

There are also some practical, temporary uses of the beech remedy. The first is for the intolerance that can be experienced by a woman during PMS (Hasnas 1999). Another instance is described in The Pocket Guide to Bach Flower Remedies.

More About Bach Flowers:
In the mid-1930s, an English physician by the name of Edward Bach discovered what are now known as the Bach flower remedies. Abandoning his successful practice in London as a researcher as well as a personal physician, Dr. Bach searched the English countryside for remedies to emotional upset. It is he who realized that emotional healing works in conjunction with physical healing and found the natural remedies to promote emotional healing. The 36 remedies used by Dr. Bach are the traditional Bach flower remedies.

Bach flower remedies are similar to homeopathic remedies. What is used is actually the essence of the flower or leaf, not the plant itself. It is also only necessary to use small amounts of the remedy at a time, just a few drops each day. Each single remedy is specific for a certain emotional upset. The emotional upset may be essential to an individual’s personality, or it may be the result of a specific situation. Regardless, this emotional upset is causing distress to the individual mentally and, ultimately, physically, so it needs to be addressed. By taking the flower remedy that most closely describes the way an individual feels, the emotional upset can be dealt with in a gentle, natural manner. For instance, if one would take a flower remedy for fear, gradually he or she would find that the fear is no longer quite so overwhelming and, eventually, may even discover that this fear no longer exists.

Personal formulas may be created by using more than one remedy at a time—because people can experience more than one emotional upset at a time. It is best to use six or fewer single remedies at any given time as it can be too overwhelming and ineffective to address more than this at once.

Note: This article was edited to adhere to current legal and practical standards.

Request Information About Our Programs